Resolving the conflict between man and elephant In the exploitation of natural resources, where do humans draw the line? Similarly, in the fight for survival, when do animals know not to overstep the boundaries? Such is the conflict between local villagers and Sumatran elephants living along the boundaries of Way Kambas National Park in Sumatra, Indonesia.

This 125,000-hectare reserve is home to nearly 200 native wild elephants – representing a little over 10 per cent of the remaining population and the largest connected group of this critically endangered species. The reserve also has an abundance of natural resources, which has attracted illegal logging, poaching, land cultivation and livestock grazing activities. The aggressive nature of these activities has threatened not only the integrity of the reserve, but also the safety of the elephants.

The depletion of their natural habitat has resulted in elephants wandering beyond the park’s confines and into human settlements. These giant land mammals have ventured into fields and villages, helping themselves to the crops as well as stores of rice grain, and occasionally damaging property and endangering lives. Threatened by the encroachment of the elephants, locals have retaliated against them.

Training humans and elephants to be envoys for peace To resolve this human-elephant conflict, education and enforcement have been key mitigation strategies. Local programmes have been conducted to educate affected communities on how to co-exist with wild elephants. At the same time, Elephant Response Units (ERUs) have been formed through the extensive training by their managers, also known as mahouts.

The ERUs usually each comprise five elephants and their mahouts. They patrol the forest, paying attention to conflict hotspots, collecting research data and serving as a deterrent to illegal human encroachment into the park. At the same time, and most importantly, the ERUs help to herd elephants away from fields and villages back into the park.

Providing aid when it’s needed most 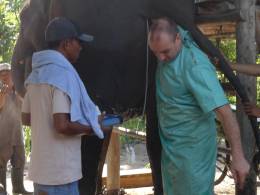 Wildlife Reserves Singapore (WRS) funds the operation of the ERUs that monitor and safeguard the park’s resident wild elephants. We also support the expansion of these units to increase their coverage and effectiveness. Furthermore, we provide medical care for the park’s elephants, occasionally deploying veterinarians and facilitating transfer of knowledge on animal husbandry.

Preserving the sanctuary of our gentle giants Educating the community, conducting regular patrols and monitoring activities in and around Way Kambas National Park, have helped preserved the integrity of the park. In total, an average of 150 patrols were conducted over a three-month period.

These efforts have helped to ensure a home for the elephants while assuring humans of a peaceful co-existence with these gentle giants.


Beyond our direct involvement in Sumatra, WRS is actively involved in numerous other efforts to ensure a holistic approach to conservation of Asian elephants. Examples of these are: